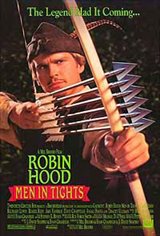 Mel Brooks directed and co-wrote this satiric comedy which lampoons a number of cinematic treatments of the legend of Sherwood Forest, including Robin Hood: Prince of Thieves and The Adventures of Robin Hood.

Robin Hood (Cary Elwes) comes home after fighting in the Crusades to learn that the noble King Richard (Patrick Stewart) is in exile and that the despotic King John (Richard Lewis) now rules England, with the help of the Sheriff of Rottingham (Roger Rees).

Robin Hood assembles a band of fellow patriots to do battle with John and the Sheriff, including Asneeze (Isaac Hayes) and his son Ahchoo (Dave Chappelle), the blind watchman Blinkin (Mark Blankfield), Will Scarlet O'Hara (Matthew Porretta), and Rabbi Tuckman (Brooks). The Sheriff is eager to put Robin Hood out of business with the aid of criminal mastermind Don Giovanni (Dom DeLuise), but Robin soon has an ally in the royal palace when he falls for the lovely Maid Marian (Amy Yasbeck), whose minder Broomhilde (Megan Cavanagh) has uncooperatively outfitted Marian with a chastity belt.