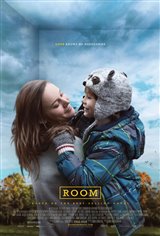 Jack (Jacob Tremblay), five, was born in captivity. The shed in which he and his Ma (Brie Larson) are confined is all he knows. His Ma was abducted when she was 17 and their only visitor is his father and her kidnapper, Old Nick (Sean Bridgers).

When Jack and his Ma finally escape, he is both awestruck and terrified by the outside world. His Ma, on the other hand, must face the long and difficult process of recovery after being imprisoned for so long.

Based on the novel by Emma Donoghue, who also wrote the screenplay.

Canadian Connection: Filmed in Toronto. Jacob Tremblay, who plays Jack, is Canadian, as are several other cast members.