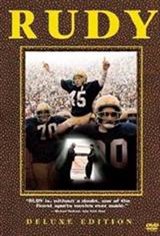 A young man learns to let nothing stop him from realizing his ambitions in this drama, based on a true story. Ever since he was a little boy, Rudy Ruettiger (Sean Astin) has dreamed of attending Notre Dame University, and playing on the Fighting Irish football team. However, Rudy's dream doesn't seem very practical; Daniel (Ned Beatty), his father, works in a steel mill and can ill afford to send his son to Notre Dame, while Rudy's grades are not especially impressive, and standing a shade over five feet tall and weighing a little over 100 pounds, Rudy is hardly built for the gridiron. However, with the help of Father Cavanaugh (Robert Prosky), a sympathetic priest, Rudy is admitted to nearby Holy Cross, and in his junior year manages to squeak into Notre Dame as a transfer student. Rudy works as an assistant to the football stadium's groundskeeper, Fortune (Charles S. Dutton), to pay his tuition (often sleeping in Fortune's office since he can't afford a room), studies diligently, and appears at tryouts for the football team. Rudy is made a member of the practice team, which means he's little more than a human tackling dummy, but Coach Ara Parseghian (Jason Miller) is impressed with Rudy's devotion and determination, and pledges that he'll allow him to dress for one game before he graduates, so his name can be recorded as an official member of the team. However, the arrival of a new coach and a tough season that allows for few unnecessary players may put a stop to Rudy's dreams within sight of the finish line. Rudy also stars Jon Favreau, Lili Taylor, and Scott Benjaminson.