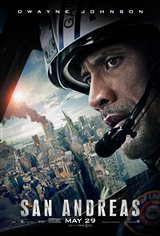 A sudden and destructive magnitude earthquake that registers 9.5 on the Richter scale leaves California in peril as it tears through the state, leaving a horrible path of destruction in its wake as it heads to San Francisco, where scientists have predicted it will cause the most damage.

As it rips apart the West Coast bit by bit, Ray (Dwayne Johnson), a rescue-chopper pilot, saves his estranged wife Emma (Carla Gugino), after the restaurant she was in at the top of a high rise building starts to collapse. He then gets a call from their daughter Blake (Alexandra Daddario), who is in San Francisco trapped in a car in a garage, abandoned by her mother's new boyfriend, Daniel (Ioan Gruffudd). Ray and Emma try to get to San Francisco to save their daughter before it's too late.