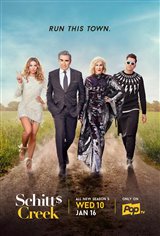 When their business manager embezzles their money, Johnny Rose (Eugene Levy) and his wife Moira (Catherine O'Hara) suddenly find they have no money or property—other than Schitt's Creek, a small town they once purchased as a joke.

With nowhere else to go, they move, along with their adult children, David (Dan Levy) and Alexis (Annie Murphy), to Schitt's Creek, where they stay in a rundown motel. As they make an effort to get used to their new situation, they try to hide their snobbishness from the small town residents, including the mayor (Chris Elliott) and their motel manager Stevie Budd (Emily Hampshire).

Filmed in Goodwood, Unionville, Orangeville, Brantford and Toronto, Ontario. Most of the cast and crew are Canadian.