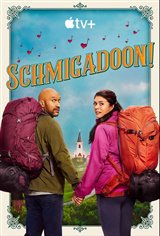 During a hike, Josh (Keegan-Michael Key) and Melissa (Cecily Strong) stumble upon a mysterious and magical town called Schmigadoon. When they enter the city square, Josh and Melissa are greeted with a musical number, so they assume the town is just a tourist attraction.

Josh, who hates musicals, can't wait to get out of there, while Melissa is charmed by the townsfolk and the place. However, when they try to leave, they become trapped in a magical illusion where the only place they can go is back to is Schmigadoon. Josh and Melissa also learn that they can't leave until they find true love, which leads Melissa to realize that although she's in love with Josh, his feelings for her don't seem to run quite as deep. Melissa turns to Danny Bailey (Aaron Bailey), known as the town's resident ladies' man, while Josh turns to Betsy (Dove Cameron), who seems to be sending him mixed messages.