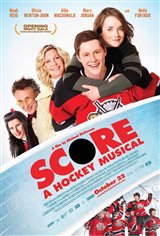 Seventeen-year old Farley (Noah Reid) has the stick-handling skills of the next Sidney Crosby. Not that Farley has any idea who Crosby is. He's led a sheltered life, homeschooled by parents (Olivia Newton-John and Marc Jordan) whose idea of homework is trips to an art gallery or ashram. His best friend is Eve (Allie MacDonald), the girl who's lived next door since they were both three. Much to the dismay of his parents, Farley loves to play shinny with the local rink rats (Dave Bidini, Hawksley Workman et al.). To their even greater dismay, Farley is signed to a major hockey league, where he achieves instant stardom, throwing him into a world of hype. Farley soon finds that hockey fame comes with a price, including the expectation to fight. Throw in a changing relationship with Eve—and Farley is losing his way.

Canadian Connection: Filmed in Toronto, Ontario. The director and most of the cast members are Canadian.