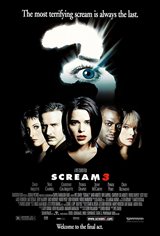 In the third and apparently final chapter of the trilogy, Sidney Prescott (Campbell) now lives in a secluded house in the Hollywood Hills, where she answers calls for a women's crisis centre under a fake name. Meanwhile. Stab 3: Return to Woodsboro, is in production at a nearby studio.

Sure enough, things start to get creepy when actors begin to get offed. Dewey Riley (Arquette), Gale Weathers (Cox) and Sidney are reunited to solve the mystery once and for all.