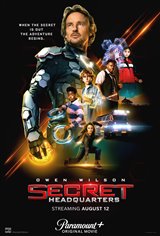 Charlie Kincaid (Walker Scobell) never sees his dad. Since his parents split, his father, Jack (Owen Wilson), always has an excuse for not being around. Instead of his father being his role model, Charlie is obsessed with a superhero known as The Guard.

When his father finally invites him to his house for Charlie's birthday weekend, he inevitably gets an urgent call from work and has to leave. In his father's absence, Charlie invites his best friend Berger (Keith L. Williams) over, who brings their classmates Maya (Momona Tamada) and Lizzie (Abby James Witherspoon).

They explore the house and discover a secret headquarters that seems to belong to a superhero. They start to believe that Charlie's estranged father might have a secret double life.