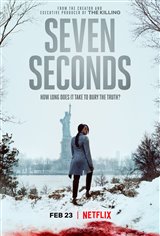 When a black teenager named Brenton Butler is accidentally hit by a car driven by a off-duty white police officer named Pete Jablonski (Beau Knapp) and left to die, a New Jersey city explodes with racial tensions, an attempted cover up, and a highly publicized trial.

Jablonski, wracked with guilt, wants to report what happened, but his fellow police officers convince him that the public would not take kindly to a white cop killing a black kid, even if it was an accident.

Meanwhile, KJ Harper (Clare-Hope Ashitey), a black assistant prosecutor with a drinking problem, is assigned to the case. She works closely with Brenton’s mother Latrice (Regina King), who discovers there may be more to her son than she and her husband (Russell Hornsby) were aware of.