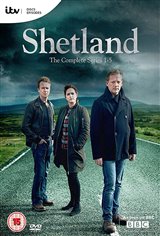 Along with his team, made up of Detective Sergeant Alison "Tosh" Macintosh (Alison O'Donnell) and Detective Constable Sandy Wilson (Steven Robertson), he investigates murders that occur in the close knit community.

The series, which has enjoyed five seasons and is still ongoing, won two BAFTA Awards, Scotland in 2016 for Best Television Drama and Best Actor - Television for Douglas Henshall.

Based on the novels by Ann Cleeves.