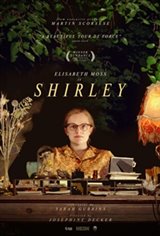 In the 1950s, famed horror writer Shirley Jackson (Elisabeth Moss) is working away at her new novel, Hangsaman, when she meets a young woman named Rose (Odessa Young). Rose is the young, ambitious wife of Fred (Logan Lerman), an academic who has come to work as a teacher's assistant for Shirley's husband, Bennington College professor Stanley Hyman (Michael Stuhlbarg). Rose and Fred are staying with the increasingly strange couple in their old home in the Vermont countryside.

After initially taking a dislike to Rose, Shirley, who obviously suffers from some form of mental illness, begins to be drawn to the young woman. As their husbands prove to be philanderers, the two women develop a twisted romance of their own.