Sierra Burgess is a Loser (Netflix) 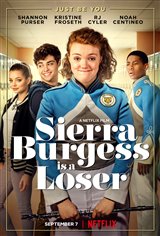 Watch Trailer
Sierra (Shannon Purser) is an intelligent teen who has a crush on a popular boy, Jamey (Noah Centineo). When he texts her by mistake, thinking he has popular girl Veronica's (Kristine Froseth) cell number, she texts him back, without letting him know her true identity.

When he wants to do a video call, Sierra has to team up with Veronica, telling her what to say. However, he has to find out sooner or later, doesn't he?