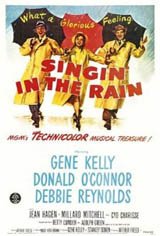 Set in 1927, Don Lockwood (Gene Kelly) and Lina Lamont (Jean Hagen) are one of America's most beloved on-screen romances. However, Lina doesn't realize their romance is simply on-screen. Things are further complicated when their latest movie becomes a musical and while Don has a pitch-perfect singing voice, Lina does not.