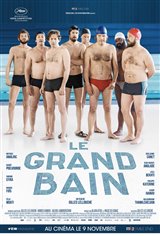 After the umpteenth extension of his time off work due to depression, Bertrand enrolls in a synchronized swimming class, thinking physical discipline will give meaning to his life. At the municipal pool, his partners are, like him, middle-aged males who’ve gone through various personal or professional misfortunes.

They’re coached by former champion swimmer and recovering alcoholic Delphine. After a few weeks of swimming laps, the group is given the challenge of representing France at the Men's World Championship, to be held in Norway.

The training, which until then had been slow-paced and cushy, changes drastically when Delphine gets sidelined and her paraplegic former swim team partner Amanda is tasked with whipping the men into shape.