Sophie and the Rising Sun 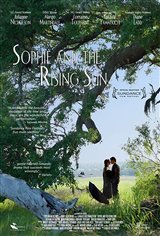 Set in the autumn of 1941 in Salty Creek, a fishing village in South Carolina, the film tells the story of two lovers, Sophie Willis (Julianne Nicholson), an artist who also fishes and sells crabs to the townfolk, the other a Japanese gentleman, Grover Ohta (Takashi Yamaguchi) swept up in the tides of history.

As World War II rages in Europe, Mr. Ohta shows up in the town. He's been badly beaten. Sophie, a native of Salty Creek, quickly becomes transfixed by Mr. Ohta and a friendship born of their mutual love of art blossoms into a delicate and forbidden courtship. As their secret relationship evolves, the war escalates tragically. When Pearl Harbor is bombed, a surge of misguided patriotism, bigotry and violence sweeps through the town, threatening Mr. Ohta's life. A trio of women, each with her own secrets - Sophie, along with the town matriarch and her housekeeper, risk their lives with their actions.

Based on the novel by Augusta Trobaugh.