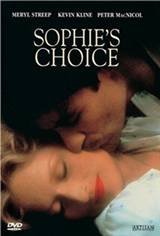 There is something unsettling about the relationship; Nathan is subject to violent mood swings, while Sophie seems to be harboring a horrible secret.

Stingo soons learns that both Nathan and Sophie are strangers to truth; the audience is likewise led down several garden paths by a series of sepia-toned flashbacks, depicting Sophie's ordeal in a wartime concentration camp.

The scene in which we discover the facts behind Sophie's choice is a gut-wrenching one; it might have been even more powerful had not the film taken so long to get there. It is betraying nothing to reveal that the character of Stingo is the alter ego of William Styron, upon whose best-selling novel the film was based.

The film is rated R, due in great part to a disposable scene wherein Stingo tries to put the make on a liberated female intellectual.