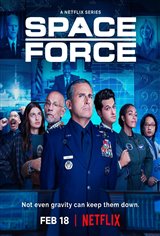 The U.S. government has created a new division of the United States Armed Forces. The Space Force must defend satellites from attack and "perform other space-related tasks."

They're led by four-star General Mark R. Naird (Steve Carell), who has always dreamed of starting something of his own but is completely underqualified for the task. He teams up with an eccentric group, including his chief scientist Dr. Adrian Mallory (John Malkovich) and head media manager F. Tony Scarapiducci (Ben Schwartz) to get the mission ready for lift-off.