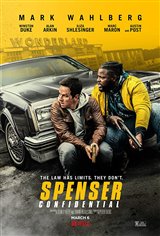 Spenser (Mark Wahlberg) is a good cop surrounded by corrupt co-workers. When evidence in a murder investigation gets ignored, he wants to know why and confronts his superior, Captain Boylan (Michael Gaston) at his home, after he's unable to get a meeting with him at work. There, he discovers the man is beating his wife, who shows up with a bloody face from inside the house. Spenser beats the man senseless and is given five years in state prison.

When his term is up, Spenser decides he wants to put the past behind him and work as a truck driver. But the night he's released, Boylan is murdered. Thankfully Spenser has an alibi. He's staying with Henry (Alan Arkin) and has a roommate, Hawk (Winston Duke), who both vouch for him.

However, Spenser wants to know who did it, especially when another good cop is found dead in his car by his wife, who has a young son. Spenser decides to solve the mystery of who really killed Boylan, in an effort to clear the good cop's name and bring peace to his family.