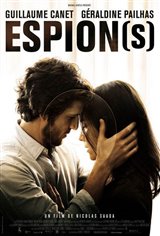 Vincent works as an airport luggage handler. With his co-worker, Gerard, Vincent occasionally steals from suitcases before they're unloaded. While rummaging in the suitcase of a diplomat, Gerard is killed when a perfume bottle inside explodes. The owner of the suitcase, a Syrian diplomat, disappears. Vincent is caught by the DST (French Intelligence Agency) and they offer him a deal—to avoid prison, he must collaborate with the French and British Secret Service in order to catch the man responsible for the explosion.

He's sent to London where, assisted by an agent named Anna, he has to find information on Peter Burton, the owner of a pharmaceutical company suspected of assisting Syrian terrorists. Ordered by the DST and M15 to pass himself off as a doctor to Burton, Vincent fails to obtain any evidence. He's then instructed to seduce Burton's wife, Claire, to see if she has any information. However, this fragile young woman, who's had a difficult time in life, falls passionately in love with the spy.