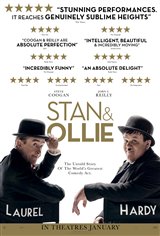 Hollywood's most famous comedy duo during the 1930s and 1940s, film stars Stan Laurel (Steve Coogan) and Oliver Hardy (John C. Reilly), were known simply as Laurel & Hardy to millions of their fans, appearing in over 100 Hollywood movies.

In post-war Britain, Laurel and Hardy, both suffering from poor health, try to reignite their film careers as they embark on what becomes their swan song - a grueling theater tour.