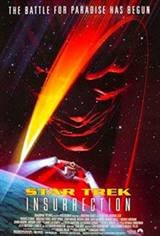 Captain Picard's effort to save Lt. Commander Data leads him to the Ba'ku planet, where the Federation and their Son'a allies are conducting a cultural survey. The Ba'ku seem at first to be a simple race of only six hundred people, living in one village on their isolated world. But when Picard meets a Ba'ku woman, Anij (Donna Murphy), he gradually learns that there is more to her people than meets the eye: She, like most of her fellow Ba'ku, is more than three hundred years old. Picard also learns that the survey is only a cover -- for a plot to kidnap the Ba'ku en masse and exile them from their world. Ru'afo (F. Murray Abraham), the Son'a leader, has discovered that the planet is bathed in metaphasic radiation that reverses aging. What the Ba'ku have, the Son'a -- an aged, dying race -- want desperately for themselves.

Picard confronts his superior officer, Admiral Dougherty (Anthony Zerbe) with what he has learned ... only to find that Dougherty and the top leaders of the Federation are part of the scheme. After all, says the admiral, there are only six hundred Ba'ku. Why should they stand in the way of progress?

Captain Picard objects: If a planetful of people can be forcibly removed from their world, destroying their way of life, where does it end? There may be only six hundred Ba'ku, but how many would it take to become wrong? A thousand? Fifty thousand? A million? But Admiral Dougherty will hear no protests: He gives Picard a direct order to withdraw and return to his previous mission.

For Jean-Luc Picard, it is the time of decision. If he obeys Dougherty's order, he would violate the principles of his Starfleet oath. Instead, he takes action. By the time he is done, Picard will have risked everything -- and left behind his crew, his career and ship to help the Ba'ku. The battle for Paradise has just begun ... © 1998 Paramount Pictures