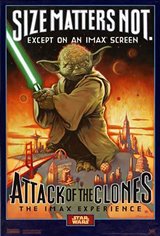 34286 votes and 456 Reviews | Write a Review
Ten years after Anakin Skywalker (Christensen) was found and released from slavery, he has grown into a young man training to be a Jedi under the tutelage of Obi-Wan Kenobi (McGregor). Following an assassination attempt on Senator Amidala (Portman), the two Jedi are assigned to protect her. A second assassination attempt leads to the separation of the two Jedi – Anakin returns with Padmé to her home world of Naboo, and Obi-Wan searches the galaxy for the one threatening her life.

When the young protagonists retreat to Naboo's lake country, suppressed emotions begin to emerge, challenging Padmé's pragmatic ideals and Anakin's Jedi vows. At the same time, Obi-Wan's investigations lead him to a water planet where he discovers the creation of an army unlike anything he has ever seen before.

Meanwhile, the galaxy is on the brink of civil war as hundreds of solar systems are threatening to withdraw from the Galactic Republic. The Jedi are becoming overwhelmed by the political unrest and Chancellor Palpatine expresses plans to build an army of the republic to deal with the problem.