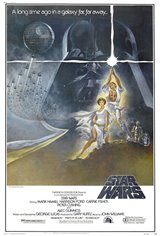 A long time ago, in a galaxy far far away, an Empire controls the inhabitants of hundreds of worlds with an iron fist. Fighting for freedom from the Empire's suffocating hold on the galaxy, a rebellion aided by Princess Leia (Carrie Fisher) makes their way back to base when they are boarded by an Imperial Star Destroyer. Before being captured by the Dark Lord Darth Vader, Leia sends a message for help with a couple of droids to the planet below.

Shortly after arriving on the planet Tatooine, the two droids, R2-D2 and C-3PO, are purchased by a moisture farmer, and cared for by his nephew, Luke Skywalker (Mark Hamill). When R2-D2 escapes to search for a Jedi Knight by the name of Obi-Wan Kenobi (Alec Guinness), Luke and C-3PO go after him. After finding both the droid and Obi-Wan Kenobi, Luke is offered the chance to become a Jedi and fight with the rebellion, but decides to return home. But Luke finds his loved ones murdered by Imperial stormtroopers, and, vowing revenge, he agrees to accompany Obi-Wan to aid the Rebellion.

With the help of two smugglers, Han Solo (Harrison Ford) and Chewbacca and their spacecraft, the Millennium Falcon, Luke, Obi-Wan and the two droids set off. But when they arrive at their destination, they discover that not only will they have to change their plans, they will have to deal with Darth Vader and the Empire's deadliest weapon, the Death Star, alone.