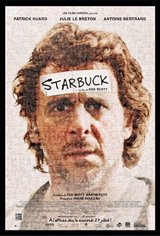 David Wozniak, 42, owes $80,000 to gangsters. He works as a delivery man for his family's butcher company and can't come up with the money. In the meantime, his girlfriend, Valerie, tells him she's pregnant. However, she quickly tells him she doesn't want him in her child's life because he's too irreponsible.

Soon after, David's past resurfaces. When he was in his early twenties, he provided sperm to a fertility clinic in exchange for money. He discovers he's the father of 533 children, 142 of whom have filed a class action lawsuit to discover the identity of their biological father, known only by the pseudonym Starbuck.

Canadian Connection: Filmed in Montreal, Quebec. Most cast members are Canadian, as is the director.