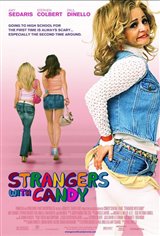 2360 votes and 10 Reviews | Write a Review   Watch Trailer
A prequel to the critically acclaimed Comedy Central series of the same name, this is the tale of Jerri Blank (Amy Sedaris), a forty-seven year old ex-con, junkie whore who decides to return home after thirty-two years as a runaway.

When Jerri arrives at her childhood home, she discovers her earlier disappearance has caused her father to slip into a self-induced coma. Moved by guilt, and with hopes of jarring her father from his eternal slumber, Jerri decides to turn her life around by picking it up exactly where she left off -- as a high school freshman. She's going to start her life over, only this time she's going to do the wrong things the right way.

Once re-enrolled in high school, and seeking to find that special thing that will erase thirty-two years of debauchery, Jerri stumbles upon the school sponsored State Science Fair. Convinced that winning the fair will resurrect her father, she signs up, expecting an easy stroll down the road to victory. Not surprisingly, she finds that the path is fraught with the many adolescent problems and temptations that plague all teenagers, but especially this forty-seven year old former boozer, user and loser.