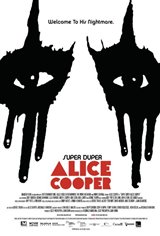 Born Vincent Furnier to a preacher and his wife, Alice Cooper earned his shock rock reputation when he donned makeup and tossed a live chicken into the crowd at a Toronto concert in 1969. The bird was torn to pieces. He and his band went on to provide increasingly violent stage shows.

This film is reputed to be the first ever "doc opera" - a blend of documentary archive footage, animation and rock opera. It features exclusive interviews with members of the original Alice Cooper Group, Elton John, Iggy Pop, John Lydon, Dee Snider and Alice himself.