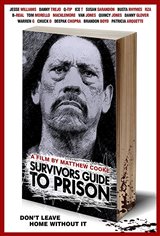 Today, you're more likely to go to prison in the United States than anywhere else in the world. So in the unfortunate case it should happen to you - this is the Survivors Guide to Prison.


Survivor’s Guide to Prison tells the story of how the U.S. got to this place. You’ll hear the rules for surviving arrest, interrogation, a criminal trial, and incarceration, should you be convicted of a crime. You’ll hear evidence presented to you about a disturbing and growing trend of a guilty until proven innocent system that has taken hold, how to advocate for your own personal liberties, and a growing call-to-action for criminal justice reform.

You will also witness the testimony of two men who tell their excruciating true stories: Bruce Lisker and Reggie Cole, both of whom served lengthy prison sentences for crimes they did not commit. You’ll live their journey with them, from being falsely accused to conviction based on the presentation of circumstantial evidence, the impact of long-term incarceration and eventual exoneration and release.