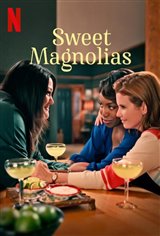 Set in the small South Carolina town of Serenity, three best friends are at a crossroads in their lives.

Maddie Townsend's (JoAnna Garcia Swisher) doctor husband Bill (Chris Klein) had an affair with his much-younger nurse Noreen (Jamie Lynn Spears), who is now pregnant. He files for divorce and asks Noreen to marry him. However, in addition to hurting his wife, he's left behind three devastated kids, whom Maddie has to comfort while dealing with her anger over Bill's actions.

Maddie's two best friends Dana Sue Sullivan (Brooke Elliott) and Helen Decatur (Heather Headley) decide that all three of them will go into business together, creating a brand-new spa in a beloved old home, with Maddie as the manager.

Dana Sue, who's a chef with her own restaurant, and Helen, who's a lawyer, are also struggling with their personal lives, but as they work to grow their business, they also learn to navigate their new lives — with a possible new love interest for Maddie in the form of her son's baseball coach, former Major League baseball player Cal Maddox (Justin Bruening).