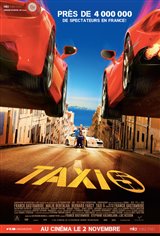 Paris police inspector Sylvain Maraud’s dream is to join the elite special forces squad, but instead, he’s transferred to Marseille when it’s discovered that he slept with the Comissioner’s wife.

The mayor of the Mediterranean city turns out to be none other than former Commissioner Gibert, who tells the team about a gang of Italians who use powerful Ferraris to commit robberies, and who have their eyes on a diamond about to go on display in a city museum. A driving ace himself, Maraud realizes the under-powered police cars won’t be able to keep up with the Ferraris, so he gets his hands on the modified taxi of the legendary Daniel Morales, a driver who once worked with the Marseille police to capture criminals.

Daniel’s nephew Eddie joins Maraud to try to capture the robbers, but Eddie’s repeated gaffes threaten to ruin the investigation.