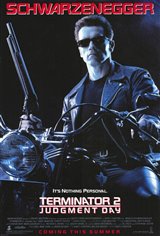 A decade after Sarah Connor (Linda Hamilton) destroyed the original Terminator, a second unstoppable killing machine (Arnold Schwarzenegger) arrives from the post-apocalyptic year 2029. But this time his mission is to stop an even deadlier Terminator, the T-1000 (Robert Patrick), made entirely of shape-shifting liquid metal and determined to kill young John Connor (Edward Furlong), the future leader of the human resistance. Sarah, John, and the Terminator counter by going after the scientist responsible for developing Skynet, the computer system fated to destroy humanity, leading to an explosive and spectacular clash with the fate of humanity in the balance.