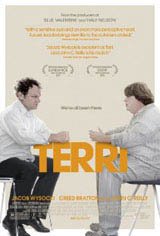 Abandoned by his parents to an ailing uncle (Creed Bratton), Terri (Jacob Wysock), an oversized teen misfit, is mercilessly teased by his peers and when he shows up at school wearing pajamas, he garners even more unwanted attention from school authorities. That is, when he decides to show up at all.

Resigned to his outsider status, Terri is surprised when his tough-talking vice principal, Mr. Fitzgerald (John C. Reilly), takes an interest in him. Although his efforts are sometimes clumsy and occasionally dubiously professional, he genuinely wants to help him through this tough time.

Under Fitzgerald's tutelage, Terri befriends a pair of fellow misfits, Chad (Bridger Zadina), an edgy loner whose rebellion masks his own insecurities, and Heather (Olivia Crocicchia), a sexually precocious girl whose beauty proves to be a trap of its own. The three teenagers, so different on the surface, but all outcasts in the unforgiving high school hierarchy, find an unexpected, imperfect bond.