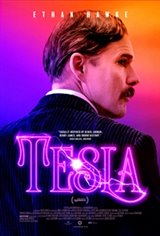 Serbian-American Nikola Tesla (Ethan Hawke) can be called one of the greatest inventors of the age, but he fought an uphill battle to get there. He works tirelessly to bring his revolutionary electrical system of alternating currents to the world but is constantly overshadowed by American Thomas Edison (Kyle MacLachlan), who is older and better known than his younger counterpart.

Although Edison realizes the genius of the younger inventor, he refuses to acknowlege his accomplishments. The entire story is told with the help of Anne Morgan (Eve Hewson), daughter of financial titan J.P. Morgan, who has more than a casual interest in Tesla.