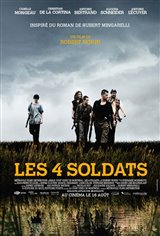 A civil war has ravaged the country, which is now divided into two camps: the society of haves, who are enclosed in urban fortresses and supported by the army, and the rebels, who are scattered throughout the countryside. War orphan Dominique has been recruited by one of the rebel troops. For days and months, she walks alongside Mateo, who has taken her under his wing. They’re joined by the intellectually-challenged Big Max. When the battalion is forced to camp in the woods for an indefinite period, the three accomplices invite soft-spoken Kevin, a fellow rebel, to shelter with them.

As winter turns to spring, the four friends come to form a family, united by the fear of returning to combat and the miraculous discovery of a wild pond, where they spend every afternoon. But their relationship becomes strained when they’re entrusted with with training and supervising Gabriel, a teenager who records all of his thoughts in a notebook.