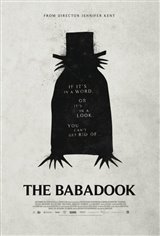 Amelia, a single mother, plagued by her husband's violent death, lives with her son Samuel. One night Samuel asks Amelia to read him a book he finds on a shelf, called Babadook. Amelia finds the book disturbing, and quickly burns it. However, the story isn’t over as she soon discovers a sinister presence lurking in the house.

As her son begins to act out of control, and she begins seeing things, her life soon becomes a fight for survival. The Babadook is coming for her son, and she will have to face her darkest fears as she tries to protect him.