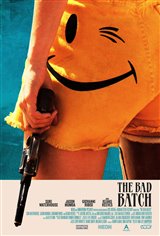 In a post-apocalyptic America, a young woman named Arlen (Suki Waterhouse) comes upon a Warning sign that states anyone going beyond that point is no longer recognized as a citizen of the United States and is no longer subject to its laws. The sign concludes with "Good luck."

She's approached by two people in a cart and captured by them. Arlen finds herself exiled in a savage desert wasteland populated by those deemed undesirable to civilized society -- including murderers, drug dealers and illegal immigrants.

They tell her that all of the people there were deemed “not good enough, smart enough or young enough.” They call themselves "The Bad Batch." A man known as The Dream (Keanu Reeves) tells her that all the things she has done has led her right to where she is at that very moment.