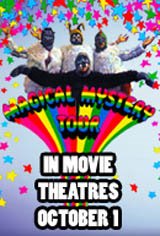 The Beatles—John, Paul, George and Ringo—take you on The Magical Mystery Tour—a surreal take on the British tradition of a coach trip to the seaside with an eccentric cast of characters.

With special features, new interviews and unseen footage this 1967 psychedelic classic is a must see for Beatles fans. The virtually forgotten film has been fully restored with a 5.1 soundtrack and is being presented properly for the first time on the big screen including never before seen footage and new interviews.