The Book of Boba Fett (Disney+) 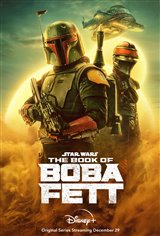 Legendary bounty hunter Boba Fett (Temuera Morrison) and mercenary Fennec Shand (Ming-Na Wen) navigate the galaxy’s underworld when they return to the sands of Tatooine to stake their claim on the territory once ruled by Jabba the Hutt and his crime syndicate.

Unlike Jabba, who ruled with fear, Boba intends to lead with respect. After taking over Jabba’s Palace, Boba gathers Jabba’s previous captains, as he believes cooperation amongst them all can bring them greater riches if they put their conflict to rest.