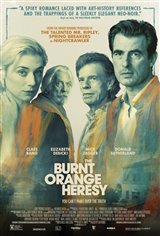 When art dealer Joseph Cassidy (Mick Jagger) invites failed art critic James Figueras (Claes Bang) to his estate, he tells him about the great but reclusive painter Jerome Debney (Donald Sutherland), who lives at the edge of his property.

Cassidy decides to strikes a deal with Figueras, offering him an interview with Debney, but in exchange he will have to steal one of Debney’s paintings. James hopes to earn back his reputation in the industry by writing a catalog of Cassidy's art collection. Figueras will stop at nothing as he becomes consumed by his own greed and insecurity when the operation spins out of control.

Based on the novel of the same name by Charles Willeford.