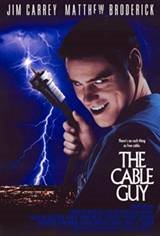 Originally planned as a silly vehicle for Chris Farley, in the hands of director Ben Stiller and star Jim Carrey, The Cable Guy became an opportunity for Carrey to flex some of his darker comedic muscles as stalker Chip Douglas. Matthew Broderick plays Steven, an average Joe who is forlorn over his recent breakup with girlfriend Robin (Leslie Mann).

When he moves into a new apartment, Steven comes in contact with Chip, who shows up to hook up the cable. Before he knows it, and whether he likes it or not, Steven has a new best-friend in the obnoxious and clingy Chip.

However, Steven soon learns that obnoxious is a walk in the park compared to Chip's behavior when Steven tells him he doesn't want to be his pal anymore. What's worse, no one -- including Robin or his family -- believes Steven when he accuses the seemingly harmless Chip of being a malevolent menace.

George Segal and Jack Black also star along with Stiller, who plays twins loosely-based on the Menendez brothers.