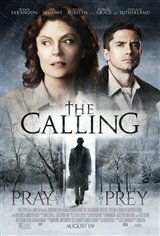 Detective Inspector Hazel Micallef (Susan Sarandon) doesn't usually get called to the scene of a murder in the sleepy town of Port Dundas. When an elderly woman is murdered, Micallef discovers during her investigation that the woman may be the victim of a serial killer.

Ben Wingate (Topher Grace), an ambitious police officer recently transferred from Toronto, joins her on the case to discover who the murderer is before he kills anyone else.

Based on the novel written by Inger Ash Wolfe.