The Clink of Ice 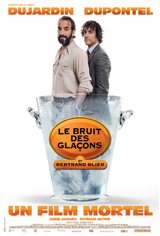 One afternoon as he relaxes on the terrace of his villa in Sete, famous writer Charles Faulque is shocked to receive a visit from a stranger who introduces himself as his brain cancer. Worried, Louisa, housekeeper, observes the strange behavior of her boss, who seems to be speaking to no one. But before long she also sees the newcomer, who settles in permanently. Alcoholic, depressed and lacking inspiration, at first Charles tries to get rid of the nuisance. Then, more and more intrigued, he lets him explain the reason for his presence at this point in his life. Secretly in love with her employer, Louisa finds herself in turn closely followed by a bitter woman dressed all in black, who says she's her breast cancer.