The Colossal Failure of the Modern Relationship 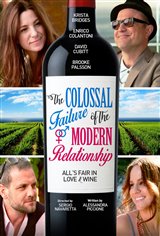 Cat (Krista Bridges), who's unhappily married to her food writer husband Freddy (Enrico Colantoni), agrees to go with him on a romantic trip to Niagara wine country. But nothing prepares her for what happens when she finds out that Freddy’s charming boss Richard (David Cubitt), with whom she's having an affair, and Richard's perky young girlfriend Amy (Brooke Palsson), are joining them.

Canadian Connection: Filmed in Niagara-on-the-Lake, Ontario. Most of the crew and cast are Canadian.