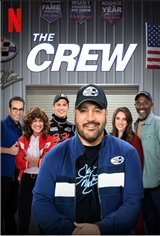 A NASCAR owner decides to step down and pass on his responsibilities to his daughter, Catherine (Jillian Mueller). While trying to improve the team and become winners, Catherine decides to switch things up, firing older crew members and replacing them with younger ones who are more tech savvy.

These changes don't sit too well with the crew chief (Kevin James), who sees it as his responsibility to protect the crew members he has been working with for years. Catherine and the crew chief must learn to cooperate in order to become the successful team they both wish to be.