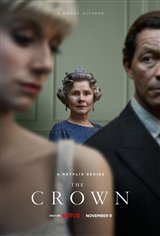 The inside story of Queen Elizabeth II (Claire Foy), beginning just before her marriage to Prince Philip (Matt Smith). Just as she's settling into life as a young wife and mother, her beloved father, King George VI (Jared Harris), passes away, due to lung cancer.

As his eldest daughter, Elizabeth has to adjust to being the Queen. She navigates life as the monarch of a nation that has recently come through a war. With Winston Churchill (John Lithgow) as Prime Minister, she grows accustomed to her new duties, though she's dismayed at having been given the responsibility at such a young age. Meanwhile, an aging Churchill struggles to keep hold of his position as other members of government ask him to step down.

Philip has trouble adjusting too, as he is no longer the head of the family. Of royal descent himself, he has to bow and kneel to the new monarch and yield to her wishes. He begins to rebel at this new situation, in which he feels emasculated. Elizabeth also has to deal with her difficult younger sister Margaret (Vanessa Kirby), who has been having an affair with married staff member Peter Townsend (Ben Miles).

In the third season, the story jumps ahead, with cast changes all around. Elizabeth (Olivia Colman) and the rest of England mourn the passing of Winston Churchill. Margaret (Helena Bonham-Carter) wants a bigger role in the Royal Family and is sent to the United States to charm President Johnson into giving financial assistance to Great Britain. Elizabeth invites Philip's ailing mother to live in Buckingham Palace and it's determined that Prince Charles (Josh O'Connor) will be taken out Trinity College, Cambridge to be sent to University College of Wales to learn the Welsh language, in order to prepare for his investiture as Prince of Wales.

In the fourth season, Queen Elizabeth and Prince Philip (Tobias Menzies) worry as Charles reaches 30 without marrying. Although he begins a romance with 18-year-old Lady Diana Spencer (Emma Corrin) and asks her to marry him, the union comes with its challenges when it becomes clear Charles can't get his first love, Camilla, out of his mind, even though she married another man. Meanwhile, Elizabeth has to deal with a new prime minister who backs a war, believes the poor should take care of themselves and will not sign an agreement against South Africa's policy of anti-apartheid.