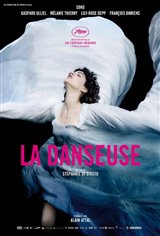 A biographical drama based on the life of famed French dancer Loïe Fuller. A pioneer of modern dance and theatrical lighting techniques, Loïe (played by Soko) began as a rural farm girl and turned herself into the toast of the Belle Epoque cabaret thanks to her revolutionary "Serpentine" dance. She dazzled Paris and beyond, earning admirers in such notable figures as Toulouse-Lautrec, the Lumière Brothers, and Rodin.

But as she continues to sacrifice her physical and mental well-being for her art, a meeting with a young prodigy named Isadora Duncan (Lily-Rose Depp) may just lead to the downfall of this 20th century icon.