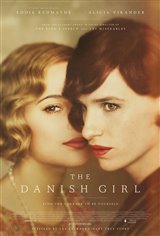 In Copenhagen in the early 1920s, Gerda Wegener (Alicia Vikander), a Danish artist, painted a portrait of her husband, Einar Wegener (Eddie Redmayne), as a woman. When the painting gained popularity, Einar started to slowly change his appearance to reflect a female appearance and renamed himself Lili Elbe.

With Gerda's support, Einar underwent male to female sex reassignment surgery. Gerda slowly comes to the realization that her husband is not only no longer a man, but not the person she married.

Based on the novel by David Ebershoff, which is based on a true story.