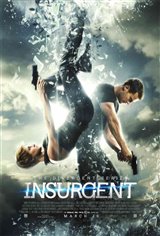 When Tris (Shailene Woodley) and Four (Theo James) are exposed as Divergents, they go on the run from Jeanine (Kate Winslet), the ruthless leader of the Erudite faction, along with Caleb (Ansel Elgort), Peter (Miles Teller) and Four's father Marcus (Ray Stevenson).

They find refuge at Amity and Tris tries to cope with her guilt at having killed Will, even though it was in self defense. The group, especially Tris and Four, find it difficult to blend into Amity's easygoing ways and when they are discovered, they have to go on the run again.

Tris tries to find out what the secret was that her parents died to protect - and once she finds out what it was, it will explain why Jeanine is so bent on capturing her.

Based on the bestselling young adult novel Insurgent by Veronica Roth.