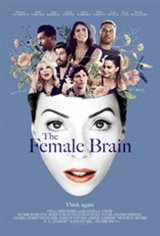 Watch Trailer
Neurologist and university researcher Julia Brizendine (Whitney Cummings) studies the effects of various stimuli on the chemistry of female and male brains to find out how they react differently. However, although she knows a lot about how human brains work, she doesn't know much about the human heart.

The couples she study have different problems. Longtime married couple Steven (Deon Cole) and Lisa (Sofia Vergara) worry that the romance has gone out of their relationship — that they've settled for being platonic friends. Meanwhile, girlfriend/boyfriend couple Lexi (Lucy Punch) and Adam (James Marsden) have troubles of their own. One is that Lexi constantly tries to change him, including deciding he should chemically straighten his hair, even though he's happy with his curls. The third couple, Zoe (Cecily Strong) and her basketball player husband Greg (Blake Griffin), were married so quickly after they met that they didn’t realize how very different they are, especially when he's stuck at home due to an injury.

Inspired by the book by neuropsychiatrist Louann Brizendine.