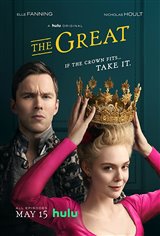 Catherine (Elle Fanning), an idealistic, romantic young girl, arrives in Russia for an arranged marriage to the mercurial Emperor Peter (Nicholas Hoult). Hoping for love and a role alongside her husband in leading the country in a way that will make the people happier, she finds instead a dangerous, depraved, backward world in which the only part she plays is to bear children.

Feeling like a prisoner inside her marriage, she doesn't know that the Emperor is considering killing her to get out of the way. Little does he know that she's one step ahead of him. With no heir in sight, all she has to do is kill Peter, beat the church, baffle the military and get the court onside in order to become the ruler.